“A slight upstroke matches the trajectory of the incoming pitch, increasing the area of solid contact.” — Ted Williams, The Science of Hitting

Do you want to hit the ball harder, get on base more often, and strike out less? Having the proper bat path will help you do all of these things.

Bat path refers to the path the bat barrel travels when you swing at the ball. The most effective way to swing is to get the bat “on plane with the pitch.” This means the barrel and ball are traveling along the same path (but in opposite directions). Because the strike zone is lower than the pitcher’s release point, the ball must travel slightly downward from the pitcher’s hand towards the plate. This angle is usually 5 to 10 degrees. To get “on plane,” the bat barrel should be on a slightly upward path (5 to 10 degrees) to match the downward path of the baseball.

Swinging on plane (slight uppercut) gives you a better chance of making contact because the barrel is traveling along the same path (in the opposite direction) as the baseball creating a larger impact zone, which is the area where the bat is able to hit the ball. 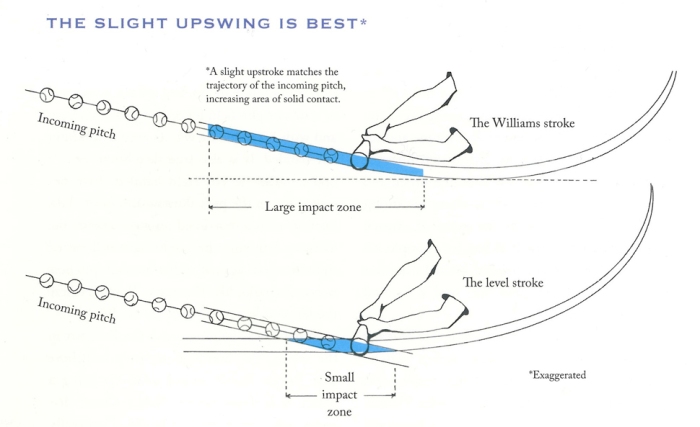 Swinging on plane also allows you to hit the ball harder. If the barrel is traveling in the opposite direction perpendicular to the path of the ball, more energy will be transferred from the bat to the ball. As a result the ball will leave the bat at a higher velocity.

Given all the advantages of swinging on plane with the pitch, it should be no surprise that all MLB hitters swing the bat with an upward angle, some more and some less. Home run hitters tend to swing with a larger uppercut, while contact hitters typically have a smaller uppercut.