“Mike [Epstein] comprehends and teaches the science of proper hitting as skillfully as anyone I have run across in all my years in baseball.” — Ted Williams, MLB Hall of Fame player 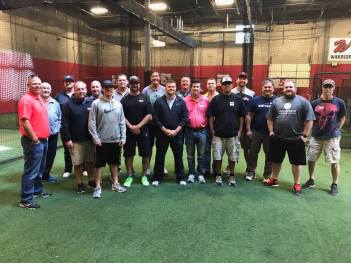 What is an Epstein Certified Hitting Instructor and what’s so great about the Epstein Teaching System? The following is taken from the Epstein Hitting website.

THE FOUNDATION OF EPSTEIN HITTING

The Epstein Teaching System was created by Mike Epstein, a 10-year Major League player and 1972 World Series champion with the Oakland Athletics (in addition, he led the A’s in home runs that season). Mike also played with the Washington Senators when Ted Williams, arguably the greatest hitter of all-time, was the head coach. Mike re-kindled his relationship with Ted Williams in the 1980’s.

Annually for the next 10 years, Mike would go to Florida and talk hitting with the best mind in the game. When he finally put all those notes into a legible and learned form, Ted Williams handed him a letter of recommendation for hitting instruction.

“Mike Epstein played for me for three years when I managed the Washington Senators. He was always a keen student of hitting. I see Mike frequently and have parried batting technique and theory with him – both the physical and mental sides – on many of those occasions. I’m a tough guy to please and impress, but I believe Mike comprehends and teaches the science of proper hitting as skillfully as anyone I have run across in all my years in baseball.” – Ted Williams (1993 Letter of Certification)

From Shoeless Joe Jackson to Babe Ruth to Miguel Cabrera, baseball’s greatest hitters have all shared the same core mechanics. These mechanics were learned through emulation. Ted Williams once told Mike back in 1969, “Watch the great hitters Mike. They will tell you everything you need to know.” Now, with the use of slow-motion video technology (and the Epstein Teaching System) the learning process through emulation can be made much easier.

So, what makes Epstein Hitting so successful? The answer is simple; it is the process of identifying the swing faults and having a program designed to fix them. With the use of slow-motion video, anyone can compare players side-by-side to see the differences. However, a Certified Epstein Instructor has the tools, training and access to the Epstein Teaching System’s time-tested drills to create a plan focused on the player’s needs.

Epstein Hitting Certification is an intensive training program for both baseball and softball. It covers everything from technique to the mental side. It includes a review of how to set up and complete correctly all the Epstein hitting drills. The program details the use of motion analysis applications to identify mechanical problems and solutions. It also explains which drills are best for correcting different types of mechanical flaws and issues. The certified instructor, therefore, is armed with countless drills that can be used to create a personalized action plan based on the analysis of the player’s video. Every player is different and has to be treated as such.

The Certification Training covers every aspect of what makes Epstein Hitting so successful around the world. Information is great, but information without implementation means nothing. What sets Epstein certified instructors apart is the ability to teach and change players in a positive structured way. Anyone with an internet connection can see how the swing is supposed to look; but what makes Epstein training so special is the ability to teach the proper swing using a systematic approach. The Epstein training system can be used to teach all hitters, whether they are 5 years-old or 25 years-old. 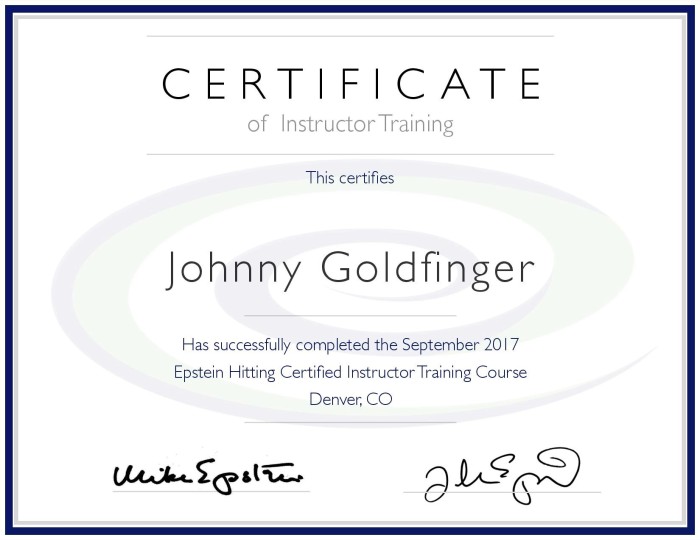