“Watch the great hitters…They will tell you everything you need to know.” — Ted Williams, MLB Hall of Fame player

NINE STAGES OF THE ROTATIONAL SWING

Almost all MLB players use what I (and others) call a rotational swing. This is easily confirmed by watching slow-motion video of them batting. MLB hitters use the rotational swing because it is the most efficient and effective way to hit the ball and generate maximum power.

The rotational swing can be broken down into nine stages, starting with the stance and ending with the follow through. At each stage, the hitter’s body and bat should be in or moving into a particular position. These are the basic movements and positions we look for when evaluating a player’s swing.

Stance is a matter of personal style and preference. Any stance is fine as long as you can get to Stage 3 on time. Nonetheless, there are several recommendations for the stance:

The load/stride involves simultaneously moving the bat into the load position and shifting weight to the front foot.

At toe touch, the hands are loaded and the body is ready to swing the bat.
hands are shoulder height and between the tips of the elbow and shoulder.

When the front heel lands, the body’s linear momentum is blocked by the front foot, the hips rotate against the front leg and the upper half begins the swing. 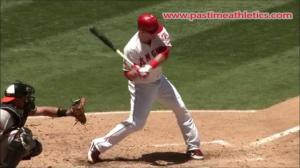 When the front heel lands, all forward (linear) momentum is blocked and rotation begins. The hips rotate first creating torque before pulling the shoulders around. As the shoulders start to turn, the rear elbow begins moving to the slot position beside the rib cage and the front elbow begins working up. 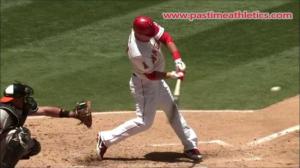 s the bat approaches the ball, hips begin to decelerate and the shoulders accelerate. Shoulder tilt and elbow slot set the bat path so the bat is on plane with the ball. Rotation of the hips causes the front foot to begin rolling over and the back foot to become weightless, the back toe may even drag across or leave the ground.

As the shoulders begin to decelerate, the arms accelerate and extend through contact.

Arms reach full extension in front of the body with the bat pointed toward the pitcher. 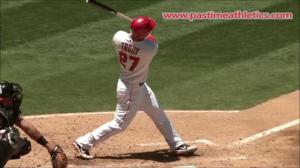 Follow through is a matter of personal style and preference. It can be with two hands on the bat or with one hand. If one hand is used, then the top hand should not release the bat until after the power v in Stage 7.